A just-published study has identified 24 new genetic markers that predispose a person to develop lupus (SLE).

Research into genetics attempts to answer why these patterns develop. Patterns that are caused by genetic variation are called heritability.

Heritability (like much of the study of genetics) is a surprisingly complicated concept. The nature versus nurture problem is a common issue in genetics research. Is variation due to a person’s genotype or the circumstances/environment that they were raised in? The NIH notes:

“The ideal experimental subjects are identical twins reared apart, because they are genetically identical but environmentally different.”

Genotype: The genotype is the DNA sequence – the entire genetic make-up – of a cell. That cell could be in any living creature. Some genes are dominant; some genes are recessive. Simply, not every gene that makes up the genotype can be seen by observing the cell/animal/human. Some traits are recessive and hidden while others are only exhibited in certain environmental situations.

Phenotype: Phenotypes are the exhibited features of a cell/animal/human. It can be thought of as the expression of the genetic code.

Even with an identical genotype, the phenotypes can be different. For example, identical twins (monozygous) are not truly identical.

Research methods have been developed using both genotypic-evidence and phenotypic-evidence to establish the heritability of a trait. Essentially all research was conducted using phenotypic similarity before large, cheap DNA sequencing.

You may recall the work of Gregor Mendel. He had pea plants with either white flowers or purple flowers. When he cross-pollinated the plants, purple flowers developed 3 out of 4 times. This was an early study of genetics and led to the development of the Punnet square to predict genetic and phenotypic outcomes. 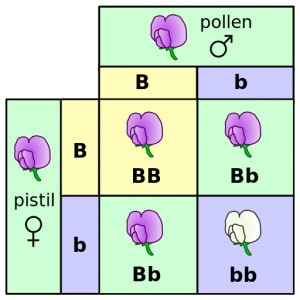 In the above example, there are 3 different genotypes (match possibilities: BB, Bb, and bb) but only 2 possible phenotypes (purple or white)

Since those early days, genetic research research has benefited from technological advances and large projects including the Human Genome Projects and the HapMap Project. From this research, tools have been developed for comparator purposes and for analysis. One of these tools, the Immunochip, was used in the recent lupus study.

These new research studies are called genome-wide association studies (GWAS). During these studies, computers “rapidly [scan] markers across the complete sets of DNA, or genomes, of many people to find genetic variations associated with a particular disease.” Treatments, prevention techniques, and diagnostics can then be created once the genetic markers are understood.

Published in July 2017 in Nature Communications, a new GWAS study identified a number of genetic markers that contribute to the heredity of lupus. The number of genetic markers identified varied by ethnicity. The study was led by researchers at Wake Forest Baptist Medical Center, Oklahoma Medical Research Foundation, King’s College of London, and Genentech, Inc. Within the paper, it is noted that 3 of the researchers were employees of Genentech, Inc. but no other conflicts of interest were reported.

The lead author of the study, Dr. Carl Langefeld of Wake Forest School of Medicine said: “This study is the largest multi-ethnic lupus genetics study to date and allowed us to identify many new genetic markers, some of which are specific to individual ethnic groups and others that are shared across ethnicities.”

To evaluate the genetic data, this study used Immunochip genotype data. Immunochip is a “single-nucleotide polymorphism (SNP) microarray.” Additional information is available at the link via the NIH to learn more about SNPs. But, SNPs are used to identify inheritance of diseases that run in families. This allows for research into the heredity of lupus.

The study evaluated genetic variations in 3 different ancestral groups: European ancestry, African ancestry, and Hispanic Amerindian ancestry. The results varied by group. During the trial, three tiers of significance were used. For simplicity, we will combine the top two in the analysis below. The third will be excluded. In total, 58 genetic markers were identified, 24 of which had not previously been identified.

All result regions were independent of the Human Leukocyte Antigen (HLA) associations identified by previous studies, though the HLA regions were also examined by this study. In addition to the new regions identified, there were 2 important take aways from this research:

There were also some important limitations to the study. The first is that there were considerably fewer non-European ancestry participants and controls. The second issue is that the Immunochip content has a strong European-ancestry bias due to when and how it was developed. The researchers noted that fewer SNP associations were found for African-ancestry participants than were expected based on power calculations.

This type of research provides insight into the future of healthcare and medicine. Government projects such as the Precision Medicine Initiative are working to build powerful datasets that incorporate genetic, biologic, and lifestyle data. In the future, all medications (and even dose size) may be prescribed based on genetic variations.

Additional information about the genetic variations can be found in the published study paper. In general, it is a great step forward to see a study include larger, non-European ancestry groups while using new-age research techniques.

One thought on “Genetic Markers for Lupus Predisposition: A New Study”

Many aspects of lupus can't be recorded with tests. Patient-reported outcomes help...

Will artificial intelligence help us better understand lupus? The answer is yes,...

This simple blood test doesn’t require a machine – only an hour...