There have been over 942 responses to the Fatigue Severity Scale. Let’s analyze the scores to look for seasonal lupus fatigue.

In previous posts, we have looked at why we use the FSS to measure lupus fatigue and some initial results from the tool. Now that there are a large number of responses spread across seasons, we will break the data into two groups to look specifically at the impact of winter on lupus fatigue.

Note: LupusCorner uses a statistically valid measure of fatigue (the FSS), and proper statistical calculations. But, these results are NOT equal to scientific studies. In particular, no steps were taken to ensure that the participants were a representative sample of all people with lupus and the scale is available to all people.

Previous studies have used the FSS in an attempt to better understand fatigue and lupus disease activity. The FSS is scored from 1 to 7; 1 is low fatigue and 7 is high fatigue. One of these studies published in 1999 found high rates of fatigue as compared to healthy subjects.

It should be noted that this study had 81 participants. 76 of the 81 were women. 58 (72%) of the participants were white. As we did not gather any demographic information with our poll, we are not able to make any evaluations about the impact of sex and race on fatigue.

Lupus fatigue in the non-winter months

With an established comparison point, we looked at the data that was not recorded during the winter months (from December 1, 2016 to February 28). In total, there were 440 completed and valid FSS scores. 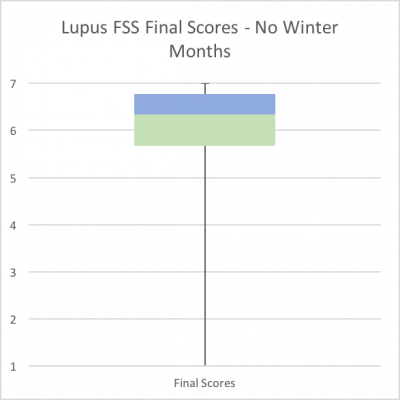 Lupus fatigue in the winter months

To compare to the data above, we looked at the FSS scores from all months not deemed to be the winter months above. Responses were available from November 2016, March 2017 – May 2017. 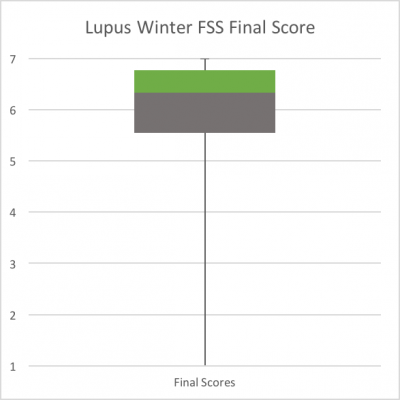 From looking at the graphs and the numbers above, you are likely able to draw the conclusion that there were no differences between fatigue scores during the winter months.

As expected when I ran a comparison of means calculation, no statistical differences were found (difference = 0.031, p = 0.6879).

Based on the above findings, it does not seem like the winter season is associated with different levels of fatigue as compared to the early spring months. As additional results are available, this analysis can be expanded to take into account all of the seasons.

By comparing the LupusCorner users to the clinical study population, we found that the responders were not significantly different than the people with lupus in that trial. However, it is important to consider the difficulty in attaining statistical significance. The FSS is not sufficient for comparing the groups.

This finding is in-line with the existing literature regarding seasonality and lupus fatigue. However, those researchers also suggested that additional studies be conducted to explore the link. In future analysis, it may be possible to include additional demographic data to explore how specific attributes, including sex, race, and age-of-lupus-onset may impact fatigue.

Age, Getting Older, and Lupus

Summer brings with it many fun activities for people with lupus, including swimming, that...

Age, Getting Older, and Lupus

The relationship between aging and lupus is a complicated one and can be difficult...