Is Selena Gomez really having a meaningful impact on lupus awareness?

Google trends is a simple way to measure how much a term is being searched over time. It is measured in relatively. Numbers represent search interest relative to the highest point on the chart for the given region and time. A value of 100 is the peak popularity for the term. 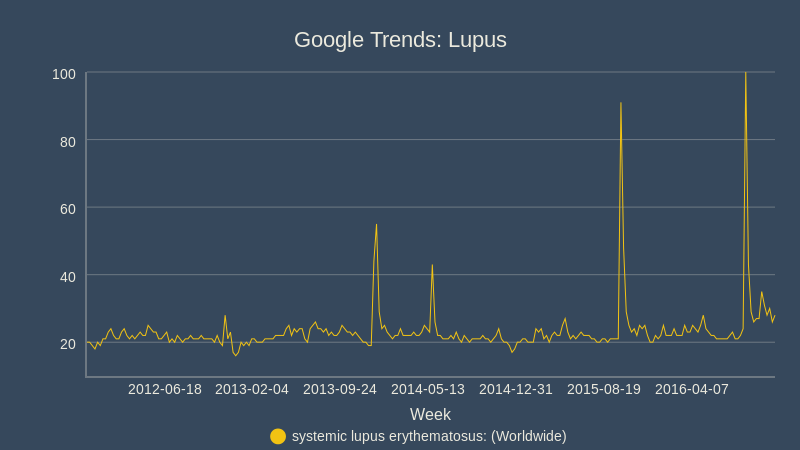 Looking at the ABC News archive its easy to see all the lupus news by date. We can go back to October 8th, 2015 and clearly see that is the date that Selena confirmed she had lupus and on August 31st, 2016 she cancelled her tour due to the disease.

So we can see that major news stories about Selena’s lupus causes an immediate spike in search popularity. But then the popularity goes back to about average (although the most recent spike appears to have a more lasting impact, but only time will tell). So it looks like a major news story about Selena gets people Googling lupus, but does that really impact awareness?

So people are Googling lupus, but does that mean they are learning about lupus? Let’s look at Wikipedia Data

Wikipedia isn’t the first thing you see when you Google lupus (unlike it is for other things) but people still rely on it to learn about the disease. The nice thing about Wikipedia is that the page views data is public. Below is a chart that shows the number of page views of the lupus wikipedia page since June 2015. Interestingly enough, you see major spikes, on the same dates as the google popularity chart, at about 4x again.

It looks like news stories about Selena don’t just get people Googling, it gets people learning about lupus, about 4 times more than on average. If you add up the spikes, it appears 100,000 Wikipedia views on lupus could be attributed to Selena Gomez.

Q&A Forum: What NOT To Say To Lupus Warriors

The Lupus Mindset: Turn Those Can’ts into Cans!

What Not to Say to Someone With Lupus

Lupus headaches are a notorious and well-known symptom of lupus. However, they...

A Physicians' Journey With Lupus: Niranjana Parthasarathi, M.D.  As an internal medicine...

Q&A Forum: What NOT To Say To Lupus Warriors